Some Food for Thought for Upcoming Guild Challenge

It seems like a long way off (September 15, 2018) but the deadline for our SVH Guild Challenge, Handwoven Wearable, will be here before you know it. I came across this article from Interweave and thought I would post the link. It gives a reference to a book written by the author of the article as well. I'll keep passing along tidbits as I find them.

https://www.interweave.com/article/weaving/designing-garments-loom/?utm_source=facebook.com&utm_medium=referral&utm_campaign=wt-alo-fb-180219-Repost-Technique-DesigningGarmentsOnLoom
Posted by Mary at 12:08 PM
Email ThisBlogThis!Share to TwitterShare to FacebookShare to Pinterest

The SVH Guild Meeting is this Saturday, February 17th at R&M Yarns. Come and browse the shop and visit with your fellow Guild Members at 9:00AM, meeting starts at 9:30. For those wishing to participate in the triangular loom demonstration, please bring an E crochet hook and a tapestry needle. If you don't have a tapestry needle, R&M Yarns has a few to lend.

See you Saturday!
Posted by Mary at 9:30 AM
Email ThisBlogThis!Share to TwitterShare to FacebookShare to Pinterest

SVH Guild calendar of upcoming events and some cool pictures

Here are some upcoming meetings and events for SVH


February 17, guild meeting to be held at R&M Yarns, 8510 TN-60, Georgetown, TN 37336.
This meeting will include a demonstration on a triangular loom for regular and bias weaving.
There will be an opportunity to get hands on practice during the meeting. For those wishing to participate in the triangular loom demonstration, please bring an "E" crochet hook and a tapestry needle. If you don't have a tapestry needle, there are some in the R&M studio available to borrow.

April 20-22, the SVH guild will be participating in the Smoky Mountain Arts Festival in
Townsend, TN. The SVH Guild will have a weaving demonstration as well as selling guild
members' handwoven items.

May 12 is the Fiber Educational Festival hosted by R&M Yarns. This is an annual event
focused on educating on all the steps that fiber goes through from animal to finished goods.
The guild will have a preparation review for the Festival on May 5th and set up for the Festival
on May 11th.

The September 15th SVH Guild meeting is the deadline for the 2018 Challenge. This year's
challenge is a Handwoven Wearable Challenge. The challenge submission should include
a technique new to the weaver.

The Guild Show will be scheduled for October and will include the display of the Handwoven
Wearables Challenge.

Updates to the calendar will be published as they are available. 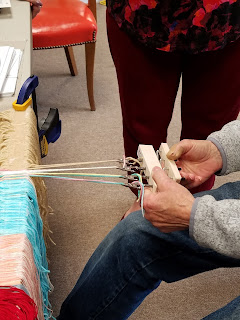 The 2017 challenge was "It's in the Bag". Here is a pic of the entries for that challenge. Hoping this gets y'all fired up for the 2018 Handwoven Wearable Challenge. Start your planning now. 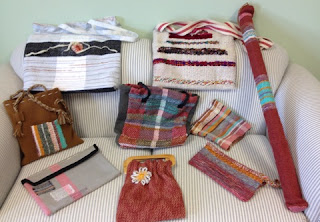